The second batches of ciabatta and pretzels were better than the firsts, but then the firsts were pretty good too, so I was happy. And the chief taster and bread eater in the house loved and at them all, so I must have got something right”

For the ciabatta, I followed this recipe and took very useful notes from Sally’s post.

I possibly rushed the first batch, because for the second batch I gave the biga more time to come up to room temperature (from the fridge), plus I made it all by hand.

I followed Gingers recipe for the pretzel rolls. It includes dunking the uncooked dough into a bath of bicarbonate of soda, which was a first for me! That’s what creates the darker coloured chewy exterior.

The first time I made the buns (above), I placed the portioned and cut dough onto baking paper on a tray to refrigerate overnight (as per the recipe) but the buns stuck to the paper and remained very soft so I had to pull off what I could which meant that they lost their shape. The second time (below), I floured the dough well and floured the tray well and it worked perfectly.

I think this is the perfect time to note, that flours behave differently around the world and country, some require more water than others. It’s something we have to feel our way with.. 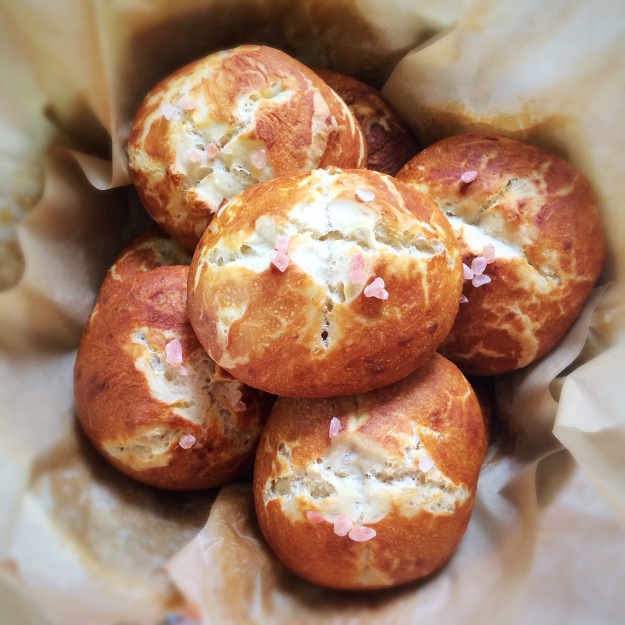 I’ve heard the term confit on so many cookery shows but never know what it means. Having seen confit garlic coming up recently, I decided to look it up. To confit historically was to preserve an ingredient by cooking it for a long period over/in a low heat in oil, grease of sugar water. This way food stuffs could be preserved for long periods.

Wikipedia says: “The term is usually used in modern cuisine to mean long slow cooking in oil or fat at low temperatures, many having no element of preservation, such as dishes like confit potatoes.” It’s typically a method used to cook meat, but can be used for vegetables too. Therefore when I saw Sally produce confit garlic and chilli, I decided to give it a go.

I do love my garlic peeler, the roll of rubber in the photo; a close friend bought it for me a few years ago and it was the perfect gift!

I made my confit in the oven (the photo above shows the oil still bubbling – warning: it’s VERY HOT) .

I submerged lots of peeled garlic cloves in enough olive oil to cover them and cooked at 140C for 45-60 minutes until they became soft and sticky, but not completely broken down. I then drained them immediately (if you leave them to cool in the oil, they sink into the oil and become completely sodden, which I didn’t like so much), let them cool then stored them in a jar, well the ones that I didn’t eat there and then…!

Once cooled I also stored the oil and used it on everything!

The garlic is soft and tasty and can be used in dishes, or merely spread on a piece of toast, as I did here… 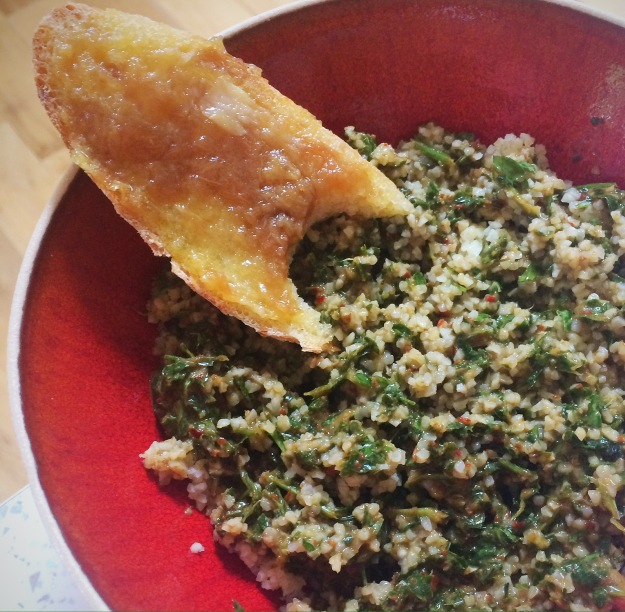 These were all fun to make and learn new processes, and I’ll make them all again!

Here it is….the first loaf from Leda, my new starter…she did GOOD 🤩🤩🤩
Fed, happy starter 🤩🤩🤩 following on from the previous post..
Back to the story of my new starter, Leda, made with the new @cotswoldflour stoneground spelt and rye flour…
A little message from me xx
🌟 I have news!!! 🌟 I am very happy to be able to tell you that I have a new book coming out in Spring 2022! 🌟 And it’s available to pre order now 🌟🌟find the link from my bio page 🌟 and this is the beautiful new cover 🌟
Light and lovely sourdough focaccia, with a perfectly crunchy base from the olive oil, and a perfect sourdough chew from the work done by my happy starter
The story of my new starter continues…I’ve decided to call her ‘Leda’, it’s another star name and is Greek meaning ‘happy’, because she really is HAPPY!!!
If you saw my new spelt & rye starter in the previous post, this is what happened next: she grew and grew and grew, and burst out of her home all over the counter! She is so full of power 🤩🤩🤩 so this is how she looked after I prised off the lid and she settled down a bit, isn’t she gorgeous…..
Sound on! Say hello to a new member of my starter family…made with the new @cotswoldflour stoneground spelt and rye flour, and oh so beautiful!
I love this!!!! When Bertie was in my kitchen with me this week, I took him through all of the stages of making my new recipes with his wonderful flours from our new sourdough box, and we recorded it ALL! We’ve got SO much to share with you - this is just a snippet of the fun!