A while ago I decided I was going to try making stuffed vine leaves. I do like a challenge, especially of the culinary type, and dolmades, or stuffed vine leaves, definitely appeared to be a challenge…So let me say now, before I continue, it’s easier than you think! Rolling the leaves is a bit time consuming and a bit fiddly, but otherwise, it’s a doddle, but at the same time, rather impressive!

I have a wonderful local market that’s on 5 days a week where I live, it’s where I buy all of my fresh produce, and it includes a fabulous, fabulous Turkish food stall. It is literally packed with all of the products that I love, things I only ever used to be able to buy from London or online or when I visited Abu Dhabi, even the same makes. I love it! I visit it every time I visit the market, I now chat to the lovely Persian lady (and regularly pick her brain about recipes and tips!) who runs the stall with her husband, and a while ago I saw the vine leaves. They were vacuum packed and so cheap, they came straight home with me. I did my research and read up on several recipes, and a standard method and filling quickly became obvious, which was where I started, and then I created my own version…of course 😉

The first thing to do was to soak the leaves as they were packed in brine, which needed washing off; it also helped to release them from one another. I soaked them for a couple of hours and then draped them round the kitchen in colanders and on kitchen roll to dry a bit, although, if they’d been damp they would still be fine, as I later discovered when I made my second batch and didn’t bother.. 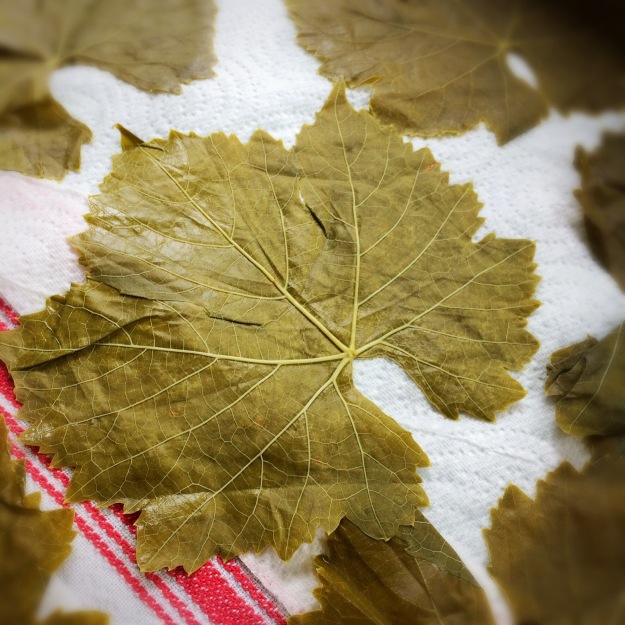 A typical recipe utilises a stuffing of rice, that’s been presoaked, chopped herbs like parsley and mint, maybe some spring onions, I used red onions, and tomatoes, lemon juice and olive oil… 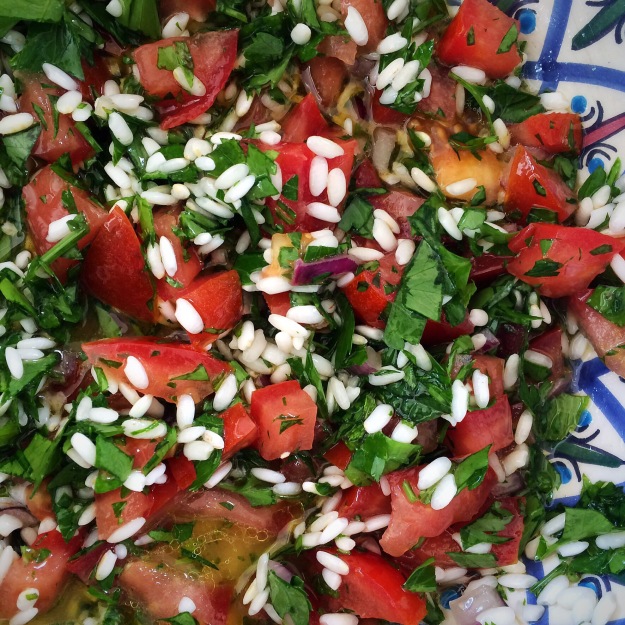 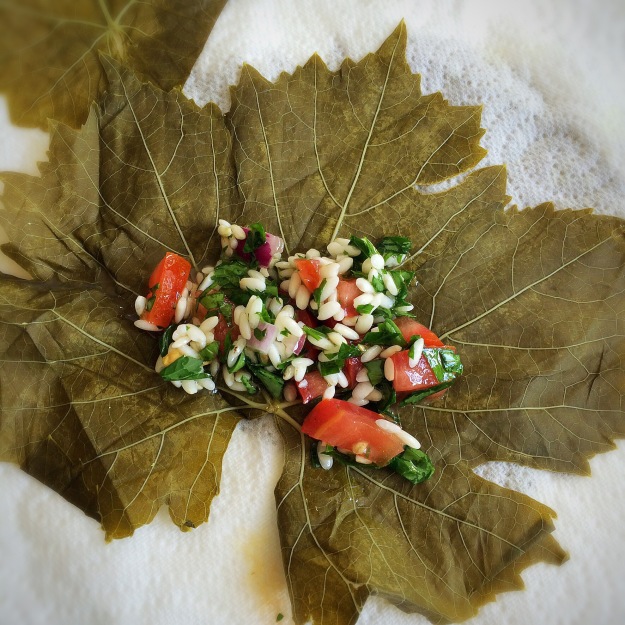 What I learned very quickly, was not to overfill the leaves. Then you just fold in the sides of the leaf and roll it up nice and tight, and pack them into your cooking vessel… 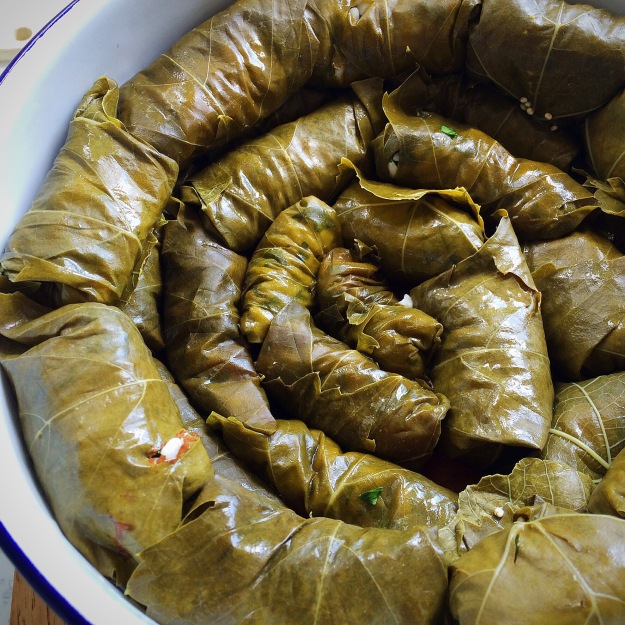 They need to be packed together snugly to keep each other rolled up during cooking – make sure you don’t pick a pot that’s too big for the job.

I started to run low on filling before I’d filled the pot, so I added uncooked quinoa to the mixture and created an immediate new version..

My first attempt at stuffed vine leaves therefore included rice and quinoa versions…and they came out perfectly! I was so proud! I used arborio rice so the rice filled ones are nice and sticky.

There was the odd burst leaf but nothing major. (There had been a layer of sliced tomatoes in the base of my pot, hence the tomatoes in the photo) The fillings were cooked and the leaves were soft, and I was a very proud parent…I did however think that there could be other ways to fill them and to bring more flavour…which is why my ‘foodbod version’ came to life (and because I had lots of leaves left and couldn’t bring myself to waste them)…so, I introduce…

Choose a cooking vessel that can be used on your hob/stove. I used a 20cm diameter enamel roasting pot.

Mixed herbs, I used a bunch of parsley, a bunch of coriander, a small handful of dill and a few mint leaves

Put all of the chermoula ingredients (list up to lemon juice) into a blender and chop so that it retains some texture. Add the lemon juice and olive oil and stir

Place a few leaves in the bottom of your cooking pot

Fill the leaves: put the shiny side of the leaf down on your counter; place 2 teaspoonsful of the filling mixture in the middle; fold the two sides of the leaf into the middle, then roll up from the bottom and create tightly packed ‘cigars’

Start packing the rolled parcels into the cooking pot from the edge round into the middle; I used smaller leaves to make some smaller ones to fill in the gaps in the middle

Depending how many leaves you have, either create a single or double layer

Fill the pot with enough water to cover the parcels, place over a medium/high heat and bring the water to the boil

Pour over some olive oil, turn the heat down and simmer for 35-40 minutes; at this point place a plate on top of the rolled parcels to hold them in place, and then a lid on the pot (I used a thick heavy plate that fitted inside the pot and sat on top of the parcels)

You may need to amend the heat under the pot to stop the liquid bubbling out, and keep check not to boil the pot dry

After 30 minutes, turn the heat off and leave to cool, then try at will!

Stuffed vine leaves are typically eaten at room temperature; I think they are best made the day before you need them. Once cooked, I drizzled some more olive oil over mine and left them to rest until the next day and the flavours developed more and the leaves stayed soft.

In my buckwheat version, the grains retained some texture, which I like, I like my grains to retain some bite.

NOTE: The cooking method is the same for the rice and quinoa versions too.

Ta da! My stuffed vine leaves experiments! I’ve had so much fun making these, consequently I now have a great pile of them to eat, but I’m not complaining! I shared some yesterday with a friend who gave them the thumbs up; I served them with salad, Greek yogurt with dill and garlic, and a citrus tahini sauce….more on that soon. For now, I’m just working my way through them all..

What I have learnt… is that you can fill the leaves with whatever grains and flavours you like really; the cooking time is required to cook and soften the leaves as much as to cook the grains; and, like so much in food preparation, the rolling is really rather meditative.

I hope you’ve enjoyed my vine leaf stuffing…I am taking these to this week’s Fiesta Friday, co hosted this week by the lovely Nancy and Sandyha, and to Corina’s Cook Once Eat Twice round up, and I promise, there’s more than enough for everyone!

NOTE: if you’d like to try making something similar but can’t find vine leaves, you can always use cabbage leaves. Check out Fae’s post for more details.

© Elaine Boddy and foodbod, 2013, 2014. Unauthorised use and/or duplication of this material, including photographs without express and written permission from this blog’s author and/or owner is strictly prohibited. Excerpts and links may be used, provided that full and clear credit is given to Elaine Boddy and foodbod with appropriate and specific direction to the original content.
%d bloggers like this: