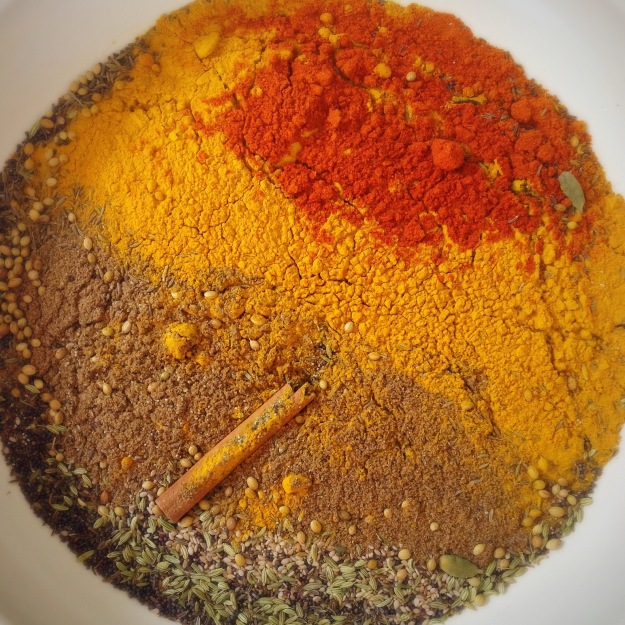 I loved the look of Dhanya’s recipe as soon as I read it, her amazing photos helped of course! They showed a wonderful looking chickpea and mustard leaves curry, full of colour and flavour…and when I read the recipe, I knew I would make it.

As you will see from the recipe, it is packed full of ingredients, lots and lots of wonderful spices, absolutely my kind of thing – some people are wary of Indian recipes and their often long list of ingredients, whereas for me, it warms my heart; I know that those spices have been carefully put together to create greatness and it makes me want to know the outcome ASAP!! There’s a reason Dhanya’s blog is called The Spice Adventuress 🙂

A key to the dish is the ‘East Indian Bottle Masala’ which is a spice mix that you make to start the process. That is what these two photos so far represent, the making of the masala mix as I collected the ingredients in a pan, then toasted them before grinding them all to a powder.

When toasting the spices, I have found that the key is to keep the heat under the pan low and watch it like a hawk. After a while you start to get an amazing aroma as the spices heat and you need to keep the spices moving so that none of them burn, but so that all of them toast. Once you feel that they done, turn off the heat and continue to move the spices around the pan as there will still be residual heat coming from it and you don’t want to undo all your work so far. Then leave them all to cool before going in into your powder. 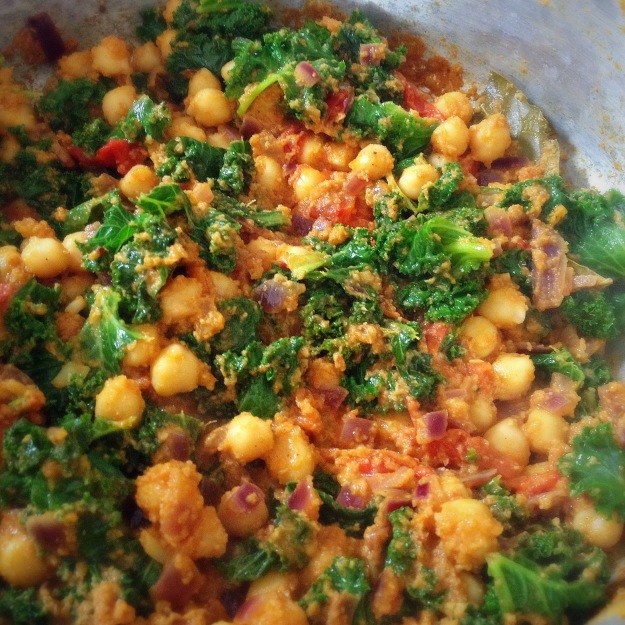 I followed Dhanya’s recipe to make the dish, replacing the mustard leaves with kale; I couldn’t source the mustard leaves and some research suggested kale was a good alternative. The outcome was very very tasty, I loved it and happily ate it three days running! 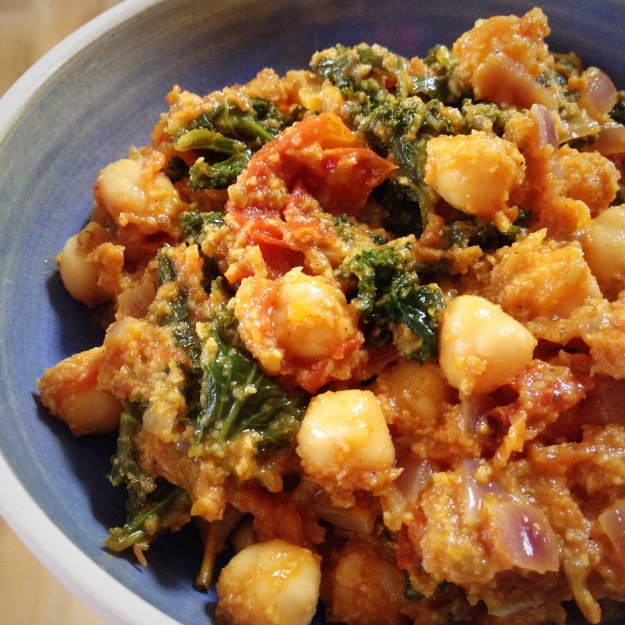 But of course , I didn’t leave it there..

The recipe for the masala spice mix makes a large jar of it so I wanted to use it again and as often as possible, so this week I threw together this sweet potato and spinach curry for my lunch… 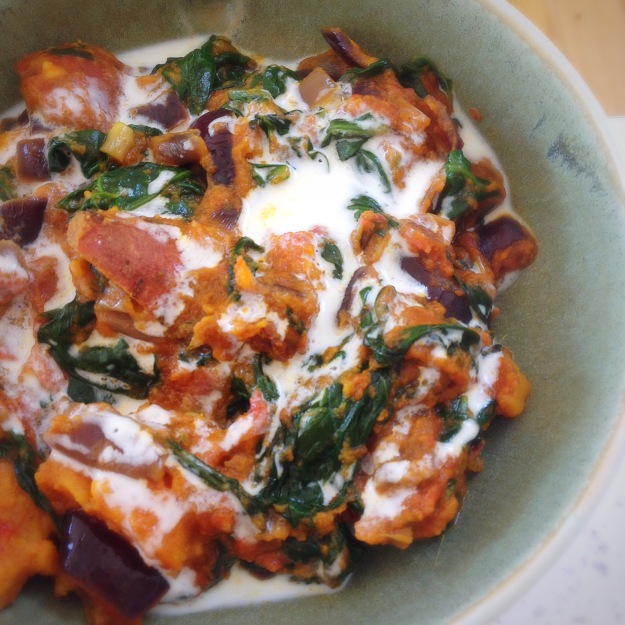 I heated a tablespoon of coconut oil in a pan and added 2 red onions, roughly chopped and cooked them for 5 minutes until nice and soft; I then added 2 heaped tablespoons of my homemade curry paste (puréed ginger, garlic & green chillies with ground cumin, coriander, turmeric and chilli) and cooked it for a few more minutes, adding a splash of water to stop the paste from catching.

I then threw in 2 heaped teaspoons of the East Indian Bottle masala spice mix and 1 tablespoon tomato puree, and cooked for a minute or so, before adding 1 medium sweet potato, which I had already cut into into cubes & steamed. I mixed everything well, adding more water as needed, then added a 250g bag of baby spinach, put the lid on the pan and left it to wilt in the steam, then stirred it all together and cooked for a few more minutes.

Some of the sweet potato was soft enough to join the sauce and really add to the richness of it. I served this with some thinned yoghurt over it all which only added to the loveliness of the overall dish. It tasted a lot better than it photographed!

With what was leftover in the pan, I then added some more yoghurt and a can of drained kala chana (brown chickpeas) to create another dish for dinner!

I’ve been absent from Fiesta Friday for a couple of weeks so I am returning this week with my collection of dishes, as well as sharing them all with Corina’s Cook Once Eat Twice collection..I hope that the lovely FF co hosts, Kaila and Laurena, and all the readers of both collections, like them.

Have a great weekend from a beautiful sunshiny England xx

Here it is….the first loaf from Leda, my new starter…she did GOOD 🤩🤩🤩
Fed, happy starter 🤩🤩🤩 following on from the previous post..
Back to the story of my new starter, Leda, made with the new @cotswoldflour stoneground spelt and rye flour…
A little message from me xx
🌟 I have news!!! 🌟 I am very happy to be able to tell you that I have a new book coming out in Spring 2022! 🌟 And it’s available to pre order now 🌟🌟find the link from my bio page 🌟 and this is the beautiful new cover 🌟
Light and lovely sourdough focaccia, with a perfectly crunchy base from the olive oil, and a perfect sourdough chew from the work done by my happy starter
The story of my new starter continues…I’ve decided to call her ‘Leda’, it’s another star name and is Greek meaning ‘happy’, because she really is HAPPY!!!
If you saw my new spelt & rye starter in the previous post, this is what happened next: she grew and grew and grew, and burst out of her home all over the counter! She is so full of power 🤩🤩🤩 so this is how she looked after I prised off the lid and she settled down a bit, isn’t she gorgeous…..
Sound on! Say hello to a new member of my starter family…made with the new @cotswoldflour stoneground spelt and rye flour, and oh so beautiful!
I love this!!!! When Bertie was in my kitchen with me this week, I took him through all of the stages of making my new recipes with his wonderful flours from our new sourdough box, and we recorded it ALL! We’ve got SO much to share with you - this is just a snippet of the fun!