On Sunday I came home from a local farmers market with some different squashes, and a punnet of Jerusalem artichokes – when I saw the artichokes I was determined to try them, I’ve seen several recipes including them recently but have never tried them myself..

The artichokes are tubers and look a lot like small misshapen potatoes.

As is my way, the first thing I did was roast half of them to see how they taste; I recall clearly from what I’ve read that Jerusalem artichokes go brown very quickly, so I washed them throughly, dried them, them chopped up everything else I wanted to roast first, got the oven ready, then cut them into halves and threw them in.

I roasted them with carrots, red onions and garlic, adding pul biber chilli flakes and sweet paprika after about 25 minutes. I ate them with half a roasted squash, tahini sauce and homous..

The artichokes may look and act like baby potatoes, but the flavour and texture is quite different. They are not floury like potatoes, they maintain a slight crunch, and have an earthier, nuttier flavour.

With the other half, I took the recommendation of lovely Linda from La Petite Paniere; Linda said that she likes to make an Algerian dish called ‘chtitha’ with Jerusalem artichokes and chickpeas, so that’s what I did, and it was so good! Following a recipe from Linda’s blog, I made a paste of garlic, harissa, sweet paprika, ras el hanout and ‘fliou’ or mint… 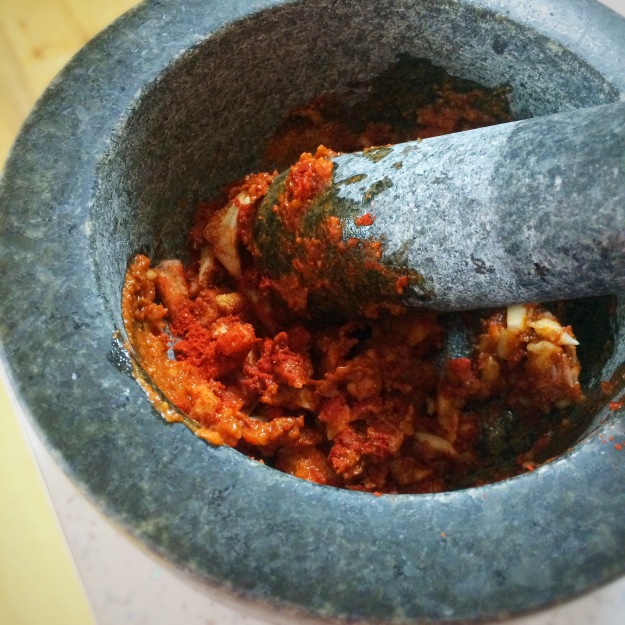 Which I cooked in olive oil before adding some water, then the chickpeas, followed by peeled and chopped artichokes..

Shown here with some tahini sauce, it was so tasty!

I also whizzed up some of the leftover veg from the night before with some tahini sauce to make a dip which i ate with it too, as shown on the right below..

I will definitely be making the chtitha paste again and cooking everything I can think of in it!!! You must visit Linda’s recipe if only to read what the word chtitha means 😉

And today I finished off the leftover chtitha with the roasted acron squash and homous..

All in all a very enjoyable couple of meals. The squash has been lovely too.

I do recommend trying the artichokes if you can find them, but I recommend making the chtitha more!

23 thoughts on “Jerusalem artichokes and ‘chtitha’…”